Me and the course. Videos (may require a further login).

Torsional stiffness for a simplified ladder-frame chassis (was: “a further Lab exercise”)

Virtual machine for the lab sessions

Enable the hardware support to virtualization your cpu is featured with from the BIOS/UEFI menu, otherwise the following error will be raised 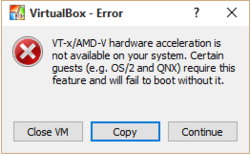 In the case you are unable to make the virtual machine run, a rather experimental terminal server based on x2go is available.

Lecture notes contain parts that were not discussed in the recorded lessons; those parts will not be asked during the exam. Also, lecture notes will be subjected to improvement where appropriate.

Notes for the exam.

Technical details will be provided for sharing a graphical terminal on which you may operate jointly with the teacher, together with the links for accessing the exam sessions.

The student is also asked to prepare paper and stationery in order illustrate the answers with drawings and graphics; these sketches will then be shown at the webcam, or sent via instant messaging (google hangout with unimore account login is ok) from a mobile phone.

According to the current organization, exam sessions have been opened on every Friday in June / July, with a further turn on the subsequent Monday, if needed.

Hi, this is a discussion board. Once logged in, you may post here questions about the obscure lesson points that need clarification. The teacher will treat those point in dedicated addenda.

Q&A of a student with respect to the beam theory, if it may be useful to someone else.

Q: How does the user decide the orientation of vector v, which is used to define the local axis system?

A: It depends on the specific kind of profile you want to represent. Consider the following example. We have an elliptic, thin walled cross section, and, in the cross sectional view, the first local axis 1 is aligned with the minor ellipse semi-axis.

Q: What does the force F and I represent , why are they called auxiliary/fictitious ?

Obviously, the magnitude of such a spuriously added force has to be imposed zero.

Those forces, which were added just to perform the deflection calculations, are hence named “auxiliary”, and are “fictitious”, or “spurious” in nature.

Questions of a student with respect to the ladder frame chassis maxima worksheet, and answers, if they may be useful to someone else.

What does the term compliance mean technically?

In general, it's the inverse of the stiffness. It is usually defined as the magnitude ratio between a deflection and the applied external action that induces it.

In Line %i24 , can you tell me what is the significance of chi ?

Those (chi1, chi2, chi12) terms are corrective factors for the shear stress/strain contribution to the internal energy lineic density. They account for the deviation between the pointwise shear stress value and its [shear force]/[cross. sec. area] average. In the last two live streaming lessons we evaluated those factors for the “almost closed” OTW profile analyzed in torsion.

Why haven't we defined the “F” (Force applied ) in our code? ( I think it's because , we are dealing with ratios)

You're right. Such a term is simplified away in the “ts” definition at %i21.

Result Analysis in which we make alpha components zero:
In this , I'm assuming that alpha_axial is not taken into consideration as N=0, correct?

Yes. The “N” internal action component is symmetric with respect to the plane the structure lies on, and it is zero for purely skew-symmetrical load cases.

I actually forgot the concept of how shear stresses can cause bending , can you give me an intuitive example please?

How are the bending and shear stiffness connected to each other and why can't they act alone ? (My intuition tries to tell me that , if there is no shear stiffness ,it becomes path of least resistance and thus the whole force acts through this weak link not providing any torsional rigidity, something like a paper)

The same vertical shift “2f” of the two profile ends may be obtained both through an S shaped purely flexural deformation, e.g. with a transverse deflection v(z)=-(f*z*(z^2-3*a^2))/(2*a^3), z in [-a,+a] (try to plot it), or through a constant slope, card deck like shift of the cross sections, which is due to pure shear. The least resistance path between those two options is actually followed.

Can you give me an intuitive explanation why the results of line i%48 and i%52 are like that? (For i%48 , I'm thinking that, because the shear stiffness is soo much , it resists the bending of the structure and thus the overall increase)

sorry but I have so many slightly different versions of the worksheet that I lost which passages are actually numbered %i48 and %i52 in yours. In general, if one of the sources of compliance – namely, the torsional compliance, the bending compliance, the shear compliance – is amplified in magnitude, or inhibited, the overall compliance follows such a variation according to a scaling factor which is in the between 0 and 1; such a factor may be discussed based on the proposed “spring in series / in parallel” sketch, and on the relative weigth of the single sources of compliance along the various elastic support paths.