maxima worksheet, as at the end of the lesson 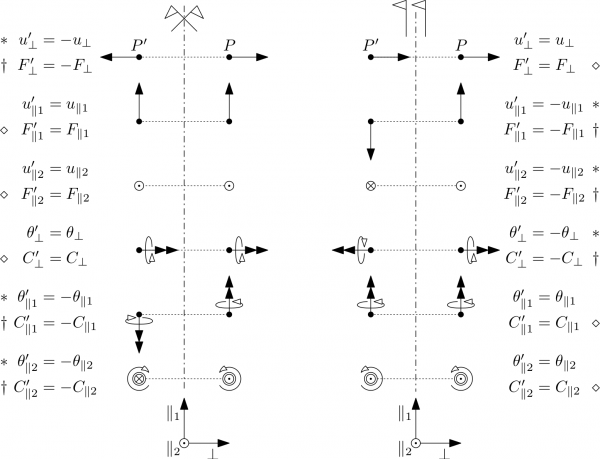 The $\ast$ (generalized) displacement components may induce material discontinuity at points laying on the [skew-]symmetry plane, if nonzero. They have to be constrained to zero value at those points, thus introducing [skew-]symmetry constraints.

These constraints act in place of the portion of the structure that is omitted from our model, since the results for the whole structure may be derived from the modeled portion alone, due to [skew-]symmetry.

In case of symmetry, a constraint equivalent to a planar joint is to be applied at points laying on the symmetry plane for ensuring displacement/rotation continuity between the modeled portion of the structure, and its image. In case of skew-symmetry, a constraint equivalent to a sphere [with dowel] - slotted cylinder joint, where the guide axis is orthogonal to the skew-symmetry plane, is applied at the points belonging to the intersection between the deformable body and the plane. 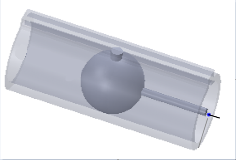 In the case of a symmetric structure, generally asymmetric applied loads may be decomposed in a symmetric part and in a skew-symmetric part; the problem may be solved by employing a half structure model for both the loadcases; the results may finally be superposed since the system is assumed linear.

Conceptually similar to [skew-]symmetry constraints are the periodicity constraints, which will be detailed if needed.

Castigliano's second theorem may be employed for calculating deflections and rotations, and it states:

where $U$ is the strain energy.

The linear density of the elastic potential (alternatively named internal) energy for the spatial rectilinear beam may be derived as a function of its cross section resultants, namely